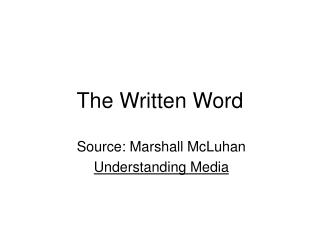 The Written Word. Source: Marshall McLuhan Understanding Media. This is actually about printed and written words . as well as typed words. McLuhan’s most famous statement is: “The medium is the message.” Persuasion through the written Word - . “tell people what you want.”. techniques of persuasion. 1. argue – most

The Written Explanation - . aos 2: creating and presenting. what is the written explanation?. you are required to produce

The Written Materials - . includes a detailed outline developed during the process of speech preparation title specific

The written accent - . you already know the standard rules for stress and accent in spanish. • when words end in a

Text to MP3 Conversion The Written Word in a New Medium - Suite. simple to use yet powerful software for your multimedia

The Word Within the Word