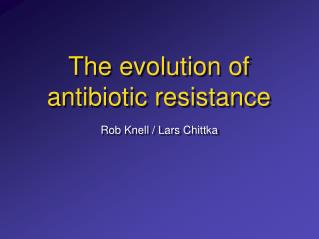 The evolution of antibiotic resistance

The evolution of antibiotic resistance. Rob Knell / Lars Chittka. MRSA in the UK. Deaths per year. Source: Health Protection Agency. MRSA - Methicillin resistant Staphylococcus aureus. - S. aureus is a common bacterium that can be found on the skin of many healthy people

The evolution of antibiotic resistance