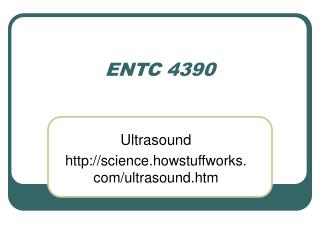 ENTC 4390 Ultrasound http://science.howstuffworks.com/ultrasound.htm There are many situations in which ultrasound is performed. Perhaps you are pregnant, and your obstetrician wants you to have an ultrasound to check on the developing baby or determine the due date.

Photo: science.howstuffworks - “i am one with the storm!”. to the 225 th anniversary of george byron’s birthday.

ENTC 4390 MEDICAL IMAGING - . structure of matter. since the late 1920s it has been understood that electrons in an atom

The Watergaw by Hugh MacDiarmid