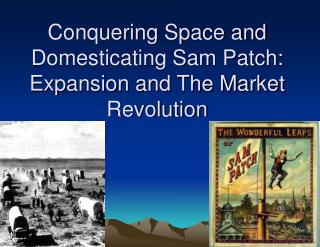 Conquering Space and Domesticating Sam Patch: Expansion and The Market Revolution. Discuss the impact of territorial expansion on national unity between 1800 and 1850. (97)

THE FRENCH REVOLUTION - . causes events and results. why. why did the french revolution last so long? 1789-1799. france

Physiology of the Pleural Space - . visceral pleura. covers the lung parenchyma including the interlobar fissures.

Conquering the Achievement Gap: The Promise of African American Males - . a summit sponsored by the michigan department

Beyond the Pavement Patch - . applications of maturity testing for bridges, structures and pre-cast concrete. july 19,

The Industrial Revolution - . by:ms pojer and ms lucchesi. why did the industrial revolution start in england? what were