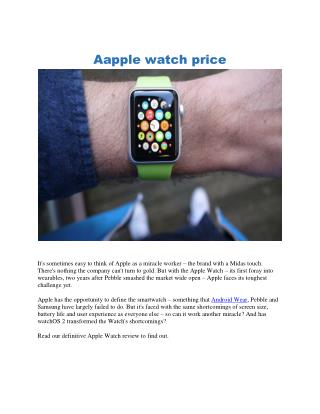 It's sometimes easy to think of Apple as a miracle worker – the brand with a Midas touch. There's nothing the company can't turn to gold. But with the Apple Watch – its first foray into wearables, two years after Pebble smashed the market wide open – Apple faces its toughest challenge yet.

Apple watch 3 - Apple watch is a wearable gadget which was introduced by apple.inc in 2015 with the goal of enhancing the

Why is Apple Watch is a Terrible Buy - Don’t buy it just yet, wait for apple future release, i am sure apple will be

Apple Watch India - : all available models and their

Apple Watch: Apple’s First Wearable - Apple watch not iwatch is a wearable computing device that runs on ios based user

Apple A1382 Laptop Battery - Http://www.dearbattery.co.uk/apple-a1382-battery.html this high quality apple a1382