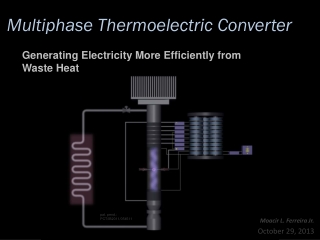 The Multiphase Thermoelectric Converter is a direct thermal-to-electrical energy conversion system designed in order to harvest most of the waste heat energy efficiently into electricity. Conceptually, it works by ionizing hot coolant in order to force it F=q(v × B) to push its ions against moving magnetic fields doing useful work converting thermal energy directly into electric power at high efficiency with almost no moving parts. Essentially, it can be comprised of two sets of concentric helix-coils (contra-aligned in Brayton cycle), feed by six phases [0° 60° 120° 180° 240° 300°], for producing opposing moving magnetic forces, for axially and radially compressing a hot ionized coolant F=q(v × B), forcing it to expand longitudinally which boosts the alternating magnetic fields F=i(L × B) ε=(Bℓv sinθ) electrodynamically converting thermal energy into electricity. Wherein, the phase rotation keeps hot plasma centered far from electromagnetic coils, which allow to induce high pressure and withstand very high temperatures for virtually getting closer to the maximum efficiency η=1-(TC/TH), e.g. TC=300K, TH=30000K, η%=99%. Together with the Aneutronic Reactor, it is to form the most perfect means for providing a high degree of cleanliness and efficiency, with practically no thermal and radioactive waste. http://www.crossfirefusion.com/thermoelectric

Electricity in the Home - . unit d: topic 7. transmission of electricity. electricity starts as a power generating

Generating Electricity - . what is energy?. energy has many different forms . when an object is able to change its

Generating Electricity - . what is energy?. energy has many different forms . when an object is able to change its

King Coal The most widely used resource for generating electricity in Indiana and in the U.S.! - . how is coal used?.