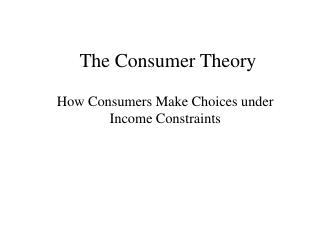 The Consumer Theory . How Consumers Make Choices under Income Constraints . Some Questions . What is behind a consumer’s demand curve? How do consumers choose from among various consumer “goods”? What determines the value of a consumer good? . Utility .

Consumer Theory - . what is consumer theory?. study of how people use their limited means to make purposeful choices.

Economics of the Firm - . consumer demand analysis. demand relationships are based off of the theory of consumer choice.

Chapter 6 Practice Quiz Consumer Choice Theory - . 1. as an individual consumes more of a given good, the marginal

Consumer Theory - . consumers choose the best bundles of goods they can afford. can afford – budget constraints .

Applications of Consumer Theory - . derivation of demand; income and substitution effects; in kind vs cash transfers;

The Theory of Consumer Choice - In this chapter, look for the answers to these questions:. how does the budget constraint