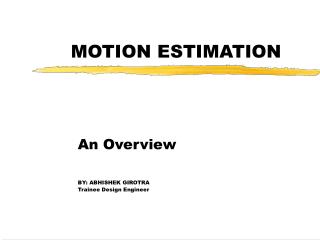 MOTION ESTIMATION. An Overview BY: ABHISHEK GIROTRA Trainee Design Engineer. In Video Coding for Compression, the basic idea is to exploit redundant data. 2 types of Redundancy in Moving Picture: a) Spatial Redundancy b) Temporal Redundancy Cause for Temporal redundancy:

Lucas-Kanade Motion Estimation - . thanks to steve seitz, simon baker, takeo kanade, and anyone else who helped develop

Motion representation - . pixel-based: one mv at each pixel, with some smoothness constraint between adjacent mvs.