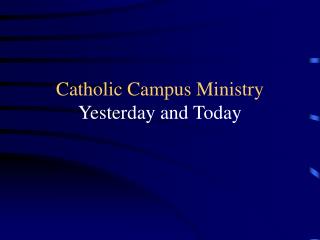 Catholic Campus Ministry Yesterday and Today. Ex Corde Ecclesiae . The university born “from the heart of the church” “an incomparable center of creativity and dissemination of knowledge for the good of humanity”

Catholic Curriculum Design Religious Education A the Curriculum - . how to promote your catholic mission/identity in all

The Shy Catholic: Catholic for a Reason Explaining and Defending - The catholic faith from scripture, tradition and the

Junsok Yang The Catholic University of Korea yanjuna@catholic.ac.kr - Background on the daegu initiative and development

Catholic Health - . welcome to the first part of your orientation to catholic health. please review the following slides.

Catholic Health - . welcome to the first part of your orientation to catholic health. please review the following slides.

The Life and Ministry of - . peter. who were jesus’ 12 disciples?. jesus begins his ministry. after being baptized by