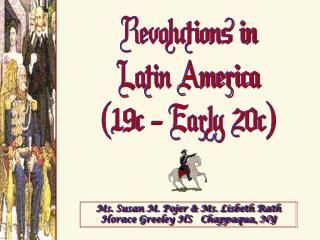 Highlights of the past year at the IIRE-Amsterdam - . 20 - 31 august  2011 international youth school. twenty six

America and the World - . 1897-1917 expansion in the pacific war with spain expansion in latin america. imperialism. the

Unit 3: The Enlightenment and Revolutions - . during this unit, you will:. know the key ideas enlightenment thinkers,

Productivity Growth in Agriculture in Latin America and the Caribbean - . presented by carlos ludena. outline. importance

Geographic Understandings of Latin America and the Caribbean

Training on Vulnerability and Adaptation Assessment for the Latin America and the Caribbean Region - . human health