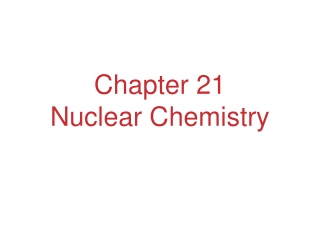 Chapter 21 Nuclear Chemistry. Nuclear chemistry is the study of nuclear reactions, with an emphasis on their uses in chemistry and their effects on biological systems. 2.1 Radioactivity. The Nucleus. Review Chap 2.3 for basic atomic structure.