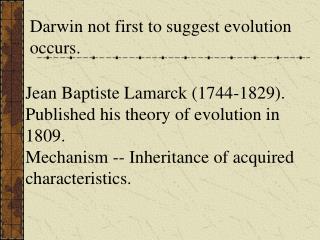 Darwin VS. Lamarck - . chapter 15-2. first to propose the theory of evolution. lamarck claimed that species are

Evolution of Evolutionary Thought - . sb5a. trace the history of the theory. sb5d. relate natural selection to changes in

Evolution - . chapters. intro to evolution. evolution. the process of cumulative change in the heritable characteristics

Evolution - . evolution . cladogram – a chart that shows an organism’s evolutionary history . change in a population

Ch 15 “Darwin’s Theory of Evolution” - . evolution, or change over time, is the process by which modern organisms