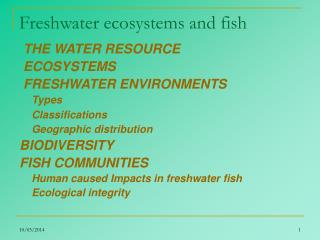 Fish in freshwaters of the world. Because freshwater systems often act as a sink for ... fish back into the population, the local proliferation of pest fish species, and clear ... Freshwater Ecosystems - . the types of organisms in an aquatic ecosystem are mainly determined by the water’s salinity

Freshwater Fish In Texas - . for today we are going to go over:basscatfish crappiesunfish. bass. . largemouth bass.

Freshwater Fish in Texas - How many of you have ever caught a fish and did not have a clue what kind it was? . well,