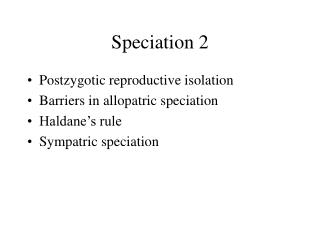 Speciation of Chromium - . research project: assessing the impact of chromium in the environment. funding provided by

MEASURING EVOLUTION - . when is it called evolution?. microevolution : changing allele frequencies in populations.

Chapter 24 - . the origin of species. overview: that “mystery of mysteries”. in the galápagos islands darwin