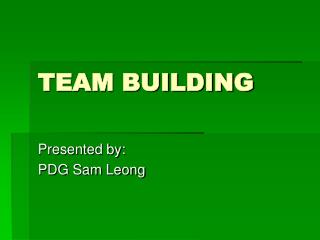 Team Building - . working with others. egg-drop!. for this task you must work with your team mate(s) to plan and make

Team Building - . you’ve chosen a team… how do you make it work ?!. agenda. definition of team model of dynamic teams

team building - What do you need to have a good team?. . why team?. the power of team is greater than the individualgood

Team Building - . mingle. think about a team that you’ve been a part of - either from your personal or professional

Team Building - . bellwork (on notetaker ). think back to a time you worked with a group. name one positive thing about

Team Building - . an example of scenario-based learning. enter. guidelines. the scene. decide on the activity which most

TEAM BUILDING - . team ???. team - a group of people working together towards a common goal. team building - the process

Team building - Team building bkk is expert in making your team has strong unity and memorable experience together. we