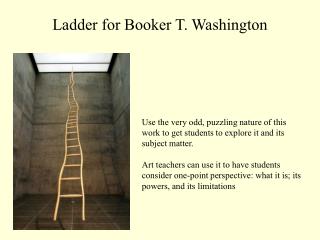 Ladder for Booker T. Washington. Use the very odd, puzzling nature of this work to get students to explore it and its subject matter. Art teachers can use it to have students consider one-point perspective: what it is; its powers, and its limitations.

Booker T . Washington - . by: kevin and rj. early years. b orn 1856 grew up as a slave went to hampton school booker

Booker T. Washington - . -in 1888 booker t. washington was appointed the first president of tuskegee institute, an

Booker T. Washington - . teaching school in a stable and hen-house. creating a new school. booker was facing too many