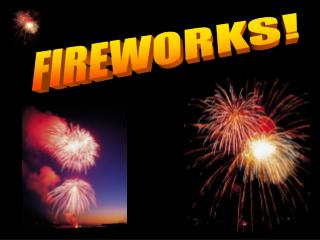 FIREWORKS!. Bonfire night is a celebration that takes place on November 5th. It can also be known as Guy Fawkes night or Fireworks night. Three things make Bonfire Night special; 1. There is a blazing bonfire that lights up the November sky. Macromedia Fireworks - . introduction to fireworks. by: j.d. this is a preview of macromedia fireworks tm . here we will

THE INVENTION OF FIREWORKS - . by: parker gunnison. history behind the invention of

What puts the BOOM in fireworks? - . chapter 4 lesson one: what is sound

FIREWORK SAFETY - . what should we remember?. the firework code. keep fireworks in a closed box follow the instructions