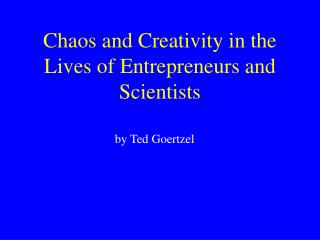 Chaos and Creativity in the Lives of Entrepreneurs and Scientists

Chaos and Creativity in the Lives of Entrepreneurs and Scientists

The Contribution of Culture to Creativity in the EU and Regional Dimensions of Creativity - . aer breakfast briefing on

The Nature and Importance of Entrepreneurs - . chapter one. what is entrepreneurship?. generally to express the desire to

Entrepreneurs and the Economy - . by antony brown. there are 9 types of entrepreneurs. 1. adviser 2.

Chaos and Fractals - . seth drebitko, and michael runyon. iteration. the action or process of repeating such as a

From Chaos to Creativity - . the evolution of a new way of thinking. overview. 1. what you can achieve when everyone

Santa and the scientists - . done by: paola , ashling and rhianon3aw. jb. introduction…. children all over the world

Chaos and Control in Combustion - . steve scott school of chemistry university of leeds. outline. review of h 2 and co

PowerPoint Presentation Perfections and Pitfalls - . or how to get an a and pass one speech proficiency task. by sheila

PowerPoint Presentation - History and Models of the Atom

The Values of Scientists and Technologists - . how and why. philosophy and theology = knowing why (purpose). the study of

Creativity in the Arts and Sciences: - . contrasts in disposition, development, and achievement. three arguments. first