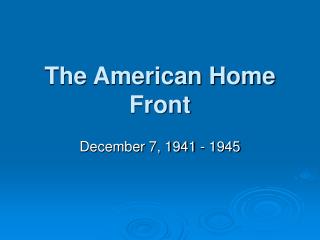 African Americans and Women During the 1930’s

War on the Home front - . american during world war ii. from peace to war. how did the economy of the united states

The Home Front - . the main idea while millions of military men and women were serving in world war ii, americans on the

War on the Homefront - . question 1: what is more important to you: civil liberties (democracy, individual freedoms,

The Home Front: How did Americans on the home front support the war? - . warm up:. how do americans who are not on the

America on the Home Front During World War II - . us history spring 2012. what was state-side america like during world

CHAPTER 10 SECTION 2 THE HOME FRONT - . before the war the federal government played a minor role in the daily lives of