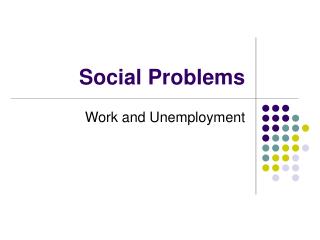 Social Problems. Work and Unemployment. Overview. Modern economy originates with the information revolution and post-industrial economy - a productive system based on service work and information technology - began in 1950s Character of work changed: From tangible products to ideas

Illustrate: Social Issues - . what are “social issues”?. wikipedia definitions: matters that can be explained only by

Is Health a Social Problem - . i love my body. a perspective influences how you:. definition of social problem. defining

SOCIAL PROBLEM - . “social problem is a deviation from the social ideal remediable by group effort” walsh and furfey

How do we use sociology to study social problems? With… - . theory: statement of how 2+ facts are related we can use