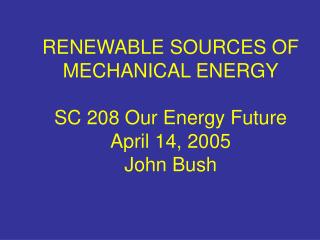 Wind Energy Source - . adzo, abeba, and sheng. wind is renewable. wind is the moving air. we can use the energy in wind

Alternative Energy Sources - . how electricity is generated …. a force is needed to push the blades of a turbine

Wind Energy - . emma o’reilly sam pennington . about wind energy. winds are caused by the uneven heating of the

Sources of Energy - . nuclear power plant. the most important use of nuclear energy (or atomic energy) is the generation

Renewable and Non-Renewable Energy's - . by: tyler smith. the world has lost power and these are some of the things we

Geothermal Energy - . how is t he e nergy converted into a u sable f orm o f energy? . a fter the water and how steam

Wind energy - . by the green recycling robot team . c ontents. why do need renewable energy ? how does wind energy work?

Tidal Energy - . by the tidal washers!!!. contents. why do we need renewable energy? how tidal energy works? examples and