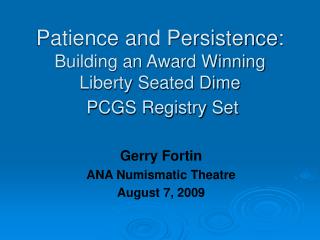 Object Persistence - . introduction. one of the most critical tasks that applications have to perform is to save and

Passage A Think About It Read About It Talk About It Write About It - . 1. what do you think makes a successful

My persistence powerpoint - . by kara angus. persistence means having a red hot go even when the work is hard or boring.

An Introduction to Object/Relational Persistence and Hibernate - . yi li 2009.11.20. the book. java persistence with

God highly values patience being cultivated in His children because - . p atience is a character trait of his. god:

What is Success? - . self management skills self awareness emotion management self-confidence stress management

Persistence - . by victoria. the meaning for persistence. persistence means to keep trying even when it’s hard. it

God Give Me Patience - Right Now! - . the need of patience:. heb . 10:36 to become partakers of the divine nature we must

Objektorienteret Middleware (OOMI) - . persistence. goal with todays lesson. after these 2x35 minutes you will be:

Persistence of HPV in a cohort of female adolescents - Background hpv and cervical cancer. hpv is necessary but not

Implementing Business Tasks with Session EJBs - . objectives. after completing this lesson, you should be able to do the

Patience - . part of the divine nature to be developed in each christian’s life. introduction. live in “instant”