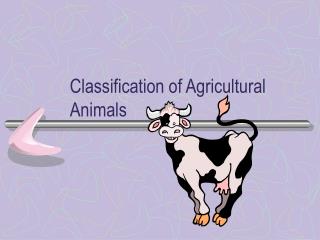 Classification of Agricultural Animals. Organisms. Identified, grouped, and classified More effectively study and communicate about them Plants and animals are classified or grouped together by characteristics they have in common. They may be characterized by. The uses people make of them

ANIMAL CLASSIFICATION - . systematics or taxonomy is the study of the kinds and diversity of organisms. the modern

Livestock in the Animal Kingdom: Taxonomy - . taxonomy and linnaeus. taxonomy : the classification of organisms in an

Animals In the Taiga - . by nikki b. abiotic and biotic in the taiga. there are lots of helpful biotic and abiotic in

Introduction to Animals - . chapter 32. characteristics of all animals. eukaryotic, multicellular, heterotrophic can be

Farm Animals - . what kinds of animals live on farms? what is the plural form for each animal name? who am i? animal name

The Domestication of Animals - . how did humans and animals first become connected?. what is “domestication”?.

Classification of Organisms - . diversity of organisms. q.1 estimates of the total number of species on earth range from

Farm Animals - . who am i?. chicken. we eat eggs that are laid by farm animals. what animal lays these eggs? it starts