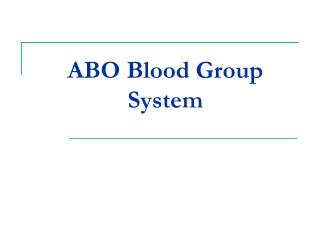 ABO Blood Group System. History: Karl Landsteiner. Discovered the ABO Blood Group System in 1901 He and his five co-workers began mixing each others red cells and serum together and inadvertently performed the first forward and reverse ABO groupings. Why is it important?.

ABO Blood Types - . chapter 14. did someone say blood?. blood types. what phenotypes are there?: types a, b, ab, o

Blood Type (ABO) - . the function of antibodies. our bodies make antibodies to protect us from “foreign” molecular