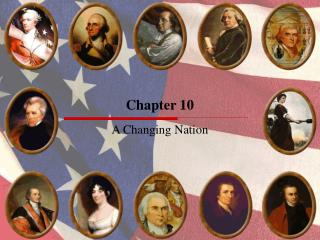 Chapter 10. A Changing Nation. Section 1: Building a National Identity. The Era of Good Feelings Republicans took control of government after the war of 1812 Madison beat Rufus King 183 to 34 Madison wanted to promote national unity Toured much of the North and middle areas