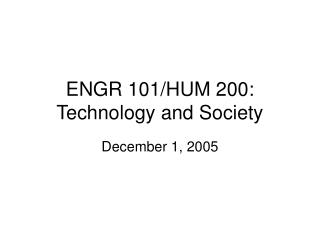 What is an Engineer? - . introduction. marc rouleau, pe bachelors degree in electrical engineering and masters degree in

The Environmental Law Society is meeting this Friday, December 3 rd at 3:30pm in Dockser 42 - We will be discussing the

Stimulating and Intensifying Technology Innovation - . our mandate…tia act no. 26 of

Technology And Society - The ethics of technology in america by: michael demchak!. technology and society. what does the