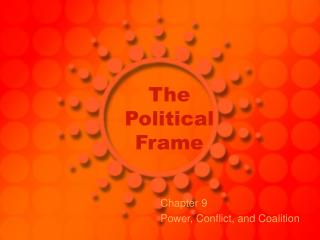 The Political Frame Chapter 9 Power, Conflict, and Coalition Politics in Organizations Leaders are naieve and romantic if they hope to eliminate politics in organizations. The must understand and learn how to manage political processes. Key Terms in Context of Text

Setting the Rules for Native Gaming - . the political frame by shalin hai-jew. abstract

The Time Frame of The Campaign: Retrospectivity in Political Advertising, Talk Shows and Debates - 5th international

Nature of Politics - . politics: science or art?. political science as a discipline involves the study of political

Chapter 7 Power and Politics - . power. a capacity to influence the behaviour of others it is a potential that need not

The Emergence of the Political Machine &amp; Politics of the Gilded Age - . chapter 15 sections 1 &amp; 2. i

Organizational Theory - . organization. greek organon : meaning a tool or instrument. so, organizations are tools or

The Political Frame - . bolman and deal. 5 assumptions. orgs are coalitions of diverse individuals and interest groups.