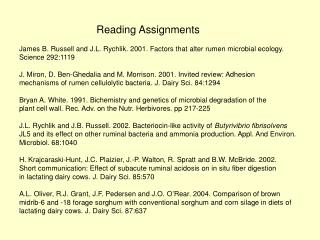 Chapter 3 Assignments - . 3.3 explain what is wrong with the table in figure 3-2. product_buyer contains a multi-valued

Getting the Most from Reading Assignments - . valarie lee department of language, literacy, and special education. top

Textbook Reading - . why read textbooks?. do you need to? access information for: tests and assignments final exam future

Literacy: Content Area Reading Strategies - . the problem. between 1973 and 2008, the share of jobs in the u.s. economy

Designing Effective Assignments - . writing across the curriculum (wac) program in collaboration with the reading