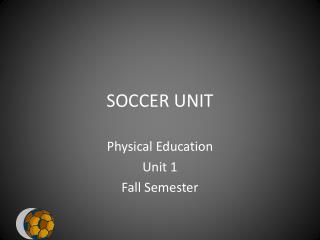 Soccer - . history and rules. soccer’s beginnings. the origin of soccer can be found in every corner of geography and

SOCCER - . soccer. introduction. it is a 2-sided game. each team need 11players on field. the game need 1 ref , 2 lineman

Soccer Unit Quiz - . next page. directions. this is a multiple choice practice test to prepare you for our upcoming test

Soccer - . by: zikala borders. the function of the human respiratory system is to transport air into the lungs and to

Soccer - . how is it played. how to play what is the rules how many players are day in field. soccer rules –

The Soccer Ball - Sebastian maces. the soccer ball. when was the product invented?. the first soccer ball was patented on

SOCCER - . ammar khan. 17 laws of soccer. the field the ball the players equipment referees linemen time of game kick off

Soccer - By: carly adkins. soccer. history of soccer. originated in britain been around since middle ages didn’t become