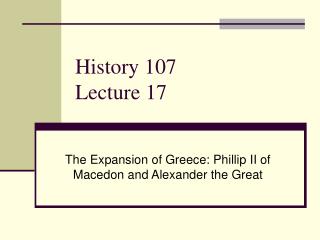 History 107 Lecture 17 The Expansion of Greece: Phillip II of Macedon and Alexander the Great A New Power--Macedon Ancient Greece was philosophically, politically, and culturally creative, but too war-like to remain unified From 431 to 338 B.C. it was in constant conflict