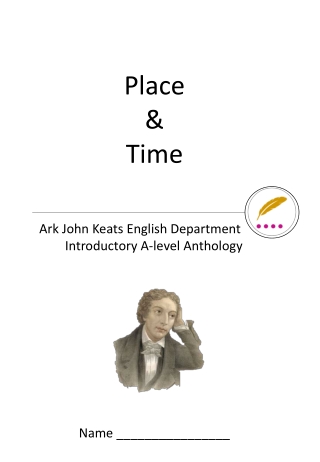 Place & Time. Ark John Keats English Department Introductory A-level Anthology. Name ________________. This booklet. Successful A-level students read and think about a wide range of Literature. There are two reasons to do this:

Chapter 6: Meteor ages and origins - . review. from the velocity and deceleration of a meteor, we can estimate its mass:.

STARS &amp; GALAXIES - . the view from earth. apparent motion. because of rotation of earth on axis, stars seem to

Minor Bodies of the Solar System - . chapter 7. kepler’s laws. 1. planets orbit the sun in elliptical orbits with the

Stars - . … how i wonder what you are. goals. tie together some topics from earlier in the semester to learn about