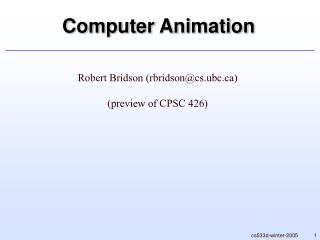 Computer Animation. Robert Bridson (rbridson@cs.ubc.ca) (preview of CPSC 426). Computer Animation. Offline: generate a film, play it back later We long ago reached the point of being able to render anything an artist could model The problem is: how to model?

Design Frame-by-Frame Computer Animations - . note : before continuing with this presentation, open the 3.01c

SKM 4200 Computer Animation - . chapter 1: introduction. about the course. 2-hours of lectures per week 3-hours of lab

3D Animation - . 3d animation is rendered clip of animated 3d objects in a 3d environment. an example: e xamples of