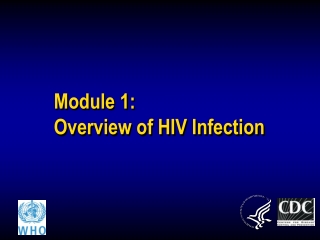 Module 1: Overview of HIV Infection. Learning Objectives. At the end of this module, you will be able to: Describe the difference between HIV infection and AIDS Discuss the HIV epidemics globally, regionally, and locally in terms of number of people affected

AIDS - . a case study of economic and social consequences. hiv/aids. introduction 1. welcome to the hiv/aids module you

HIV/AIDS - . nassau and suffolk counties have the highest # of hiv &amp; aids cases. more than any other suburb in

HIV/AIDS Mainstreaming - . nabcoa/gtz/ded training workshop on “how to establish a comprehensive hiv/aids workplace

HIV/AIDS - . what is aids?. introduction to hiv/aids: what you need to know aids- acquired immunodeficiency syndrome

AIDS - . by n.w. hiv and aids are two different diseases you can get aids like you get a cold or flu aids has three

Basic Facts About HIV and AIDS - . presentation objectives. by the end of this session you should be able to: explain

Aids - . what is it? how do you get it how does aids affect the immune system what do you take for it? is it curable? .