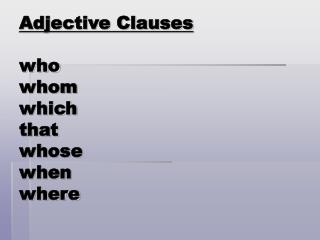 Adjective Clauses who whom which that whose when where

Adjective Clauses who whom which that whose when where. We use adjective clauses also called relative clauses to identify or give additional information about nouns (people, places, or things).

Adjective Clauses who whom which that whose when where

Tutorial on Independent and Dependent Clauses - . by: jeannine baum. english language arts. the objective of this

CHAPTER 21 PHRASES and CLAUSES - Objectives for the day: to recognize prepositional phrases in sentences and distinguish

Second Semester Review - . be careful, if you get the wrong answer, you will have to start back over from the very

Propositions - . recap. common three-way equivalence:. sentence meanings the objects of the attitudes the referents of

Comparative and Superlative Adjectives and Adverbs - . adjectives and adverbs are words the modify other words. the

What does an adjective do in our language? - . describes a noun or pronoun. 2. what are the 3 adjective test