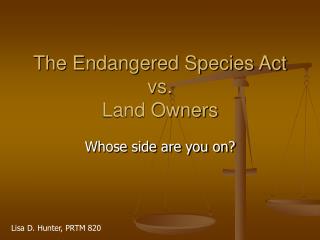 The Endangered Species Act vs. Land Owners. Whose side are you on?. Lisa D. Hunter, PRTM 820. Overview. Creation of the Act The List Case: What would you do? ESA at work Resolve. The Act. Created in 1973

CHAPTER 22 DARWINISM - . on the origin of species by means of natural selection. published november 24, 1859. two points

Species Diversity - . what is a species?. atelopus frog discovered in suriname, june 2007. the biological species

Fish Fauna of the Great Lakes - 1. who are they? 2. where did they come from? 3. what is the nature of the interactions

ENDANGERED ANIMALS - Giant pandas by destiny, marlen, and alexa today the news is about pandas. pandas are endangered