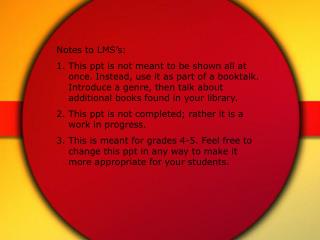 Notes to LMS’s: This ppt is not meant to be shown all at once. Instead, use it as part of a booktalk. Introduce a genre, then talk about additional books found in your library. This ppt is not completed; rather it is a work in progress. Music Festivals To Attend This Summer - The season of bare shoulders, sunburnt noses, beers on patios and hanging around

RESUME RESUME - What it is really about this ppt will help you to: understand the basic principles of text- resume

Unit 1 - . “genre study” and oedipus. genre. a category of literature. the main literary genres are fiction,