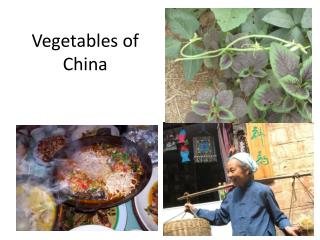 Vegetables Markets in China - China's demand for vegetables has grown at a fast pace in the past decade. in the next five

Vegetables - . chapter 16 8 classifications how much to eat why?. watch clip from jamie oliver’s food revolution.

Vegetables - . objective. students will be able to: 1) distinguish between the classification of vegetables 2) identify