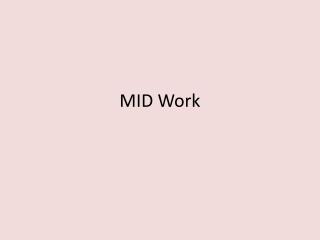 MID Work. Functionality . Used as a secondary device to compliment a laptop/notebook rather then a replacement device Primarily used for easy note taking and quick web surfing. Features. Clamshell devices appear to be the most popular style with consumers

Work and Energy : Forms and Changes - . what is work?. remember that a force is a push or a pull. work requires both

Applicability of the ADA to Ticket to Work Employment Networks - . presentation based on article by peter blanck, lisa