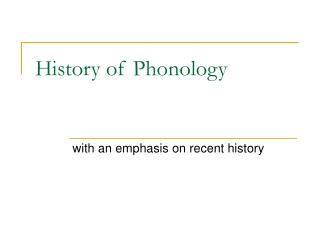 History of Phonology. with an emphasis on recent history. 1900-1930. Development of Phonetics are a special branch of linguistics Unlike historical linguistics, also concerned with sounds through its preoccupation with sound change, phonetics was firmly rooted in synchronic analysis

The Goals of Phonology: - . to note and describe the sound patterns in language(s). to detect and taxonomize (classify)

Phonology I - . phonemes and simple rules. connecting with last week. remember last week: the physics of speech. and, the

Using Phonetics - . in teaching. what is the phonology?. phonetics all of the sounds phonemics significant sounds phonics

Introducing SLA of phonology research: a historical perspective - . sla and contrastive linguistics. the past: