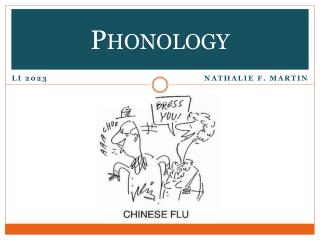 Phonology. LI 2023 Nathalie F. Martin. Introduction: Phonology. No human language exploits all phonetic possibilities Every language makes its own particular selection from the range of all possible ___________. Introduction Phonological Representation. Phonetics &amp; Phonology of English: How &amp; Why We Speak the Way We Do - . dr. latricia trites academic

Phonetics in Phonology - Groningen 30 januari 2004 workshop on the boundaries of phonology and phonetics. phonetics in

Phonetics and Phonology - . chapter 2. production of sounds . human language displays a wide variety of sounds, but