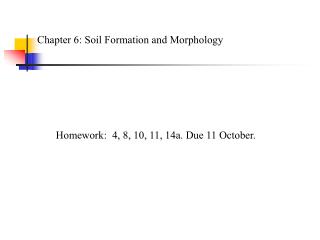 Reading Assignment Chapter 7: Soil Aeration and Temperature - . too much water for too long. aeration relates to:

Soil Nutrients - . chapter #8. what nutrients do plants get from the air and water?. carbon hydrogen oxygen. what are the

Soil Classification NR 200 Chapter 3 - . why classify?. soils are classified on the basis of their profile

Weathering, erosion, soils and fossils review - . the unweathered rock that lies below the lowest layer of soil depostion

Weathering and soil formation!  - . chapter 10 by: paula tatum. weathering . weathering is the breakdown of rock into

Soil Formation Notes - . soil . the loose, weathered materials on earth’s surface in which plants grow. soil is a

Chapter 4: Weathering and Soil Formation - . sword word . weathering – is a mechanical or chemical process that causes

Soil types and soil concerns - . the formation of residual soil is a complex interaction of the clorpt factors. these in

Soil Formation and Mass Movements - . bellwork : pg. 143-145 how does water cause mass movements? how do earthquakes

Morphology A Closer Look at Words - . by: shaswar kamal mahmud. what's morphology? “is the study of forms”

CHAPTER - 9 SOIL - . 1) importance of soil :-. i) soil is an important natural resource. ii) soil helps in the growth of

English Morphology - . morphology. the branch of grammar which studies the structure of words. morpheme a minimal unit of

Food, Soil, and Pest Management - . chapter 10. three big ideas. ~ 1billion do not get enough to eat and ~1billion people