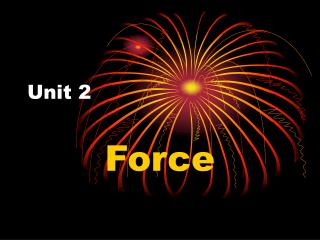 Unit 2. Force. Force – push or pull. a force always acts in a certain direction ex. if you push something, the force is in the direction of the push. Forces in Nature. Electric force ex. lightning Magnetic force ex. magnetic poles Gravity. Weight is a force. Newton.