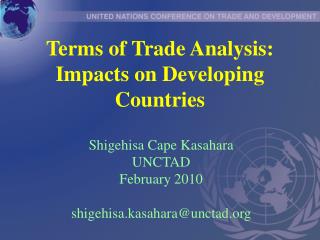 Terms of Trade Analysis: Impacts on Developing Countries. Shigehisa Cape Kasahara UNCTAD February 2010 shigehisa.kasahara@unctad.org. Objectives of the Presentation. Introduction of the concept of terms of trade (barter terms of trade vs income terms of trade)

The purpose of America’s Open Door Policy was to - 1. in 1900 the united states declared an open door policy that

Trade-Off Analysis of ROI for Capability Stepping-Stones to a Lunar Habitat - . by: gmu seor 2012 senior design

WITS World Integrated Trade Solution Training - . washington march 2004. program. what is wits and how to access wits for

Publishing in Developing Countries: Problems and Solutions - . introduction. who am i? focus of session academic books