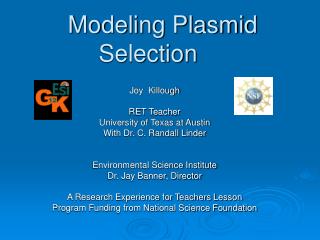 Plasmid 24307 7TFC - This gel depicts the neb 1kb ladder and a digestion of the plasmid 24307 with the following enzymes:

Chapter 20: - . biotechnology: dna technology &amp; genomics. the big questions…. how can we use our knowledge of

Life and Cells - . what is life? can grow, i.e. increase in size. can reproduce. responsive to environment. metabolism:

Transformation Lab - Circular sequences of dna that can be incorporated into a bacterial host genome. transformation lab.

Modeling Plasmid Selection - . and authentic assessment. 6-2010. http://biology2020.wikispaces.com/. with the pglo

MICROBIAL MODELS - Viruses and bacteria. microbial models. chapter 19 and 27. viruses. no fossil record. when did they