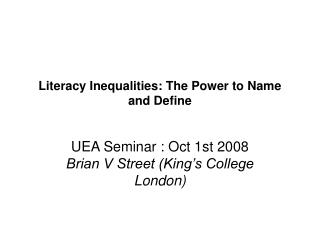 Literacy Inequalities: The Power to Name and Define

Literacy Inequalities: The Power to Name and Define

Social Work and the Struggle for Social Justice in an International Context - . the irish experience kerry cuskelly

An Equity Literacy Workshop for Educators - . by paul c. gorski october 21, 2014. i. introduction: who we are. who is in

Literacy Inequalities in Theory and Practice: The Power to Name and Define - . literacy inequalities an international

Beyond the Basal: Defining Literacy and What it Means to be Literate - . june 13, 2011 presented by dana karraker and

Challenges for social and environmental justice in an increasingly vulnerable and unequal world - . janet mcintyre-mills

Literacy Reimagined - Digital literacy and global collaboration skills are needed for success in the 21st century. this