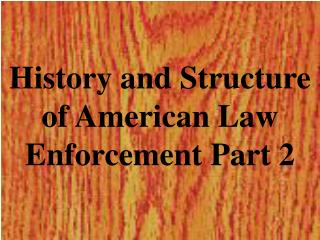 History of Law and Law Enforcement - . l.e. class. justice system. punish the offender there was no attempt at

The History of American Media – Part 2 - . exaggerate the news to create sensation that attracts readers. yellow

History of Law Enforcement Principles of LPSCS - . police in a democratic society. the police are entrusted to serve and

Structure of part 2 - Reason to keep away from it. whoever goes to a magician and believes in what he says has