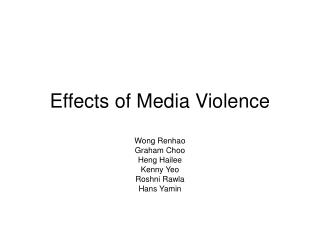 Media Violence - We are exposed to acts of violence everyday just by turning on a television. if a child watches 2 to 4

Media Violence - . why are we taking this so seriously?. 48 children died in schools last year. 9 out of 10 were stopped

Media Effects - . are media effects real? do we need to worry about them? are you impacted by the media? if so, in what

Media Effects - . what is the impact of the mass media? what effect do the media have on us?. media roles. agents of

Media effects - . laswell’s model of mass communication. who says what in which channel to whom with what effect.