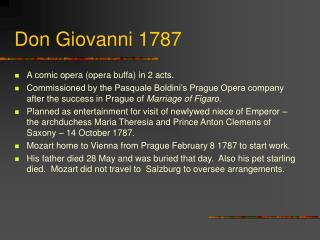 Don Giovanni 1787. A comic opera (opera buffa) in 2 acts. Commissioned by the Pasquale Boldini’s Prague Opera company after the success in Prague of Marriage of Figaro.

Constitutional Convention May 25, 1787 to September 17, 1787 - . purpose of the constitutional convention. the goal was

Giovanni da Verrazano - . giovanni da verrazano. introduction he was born in tuscany, italy,1485. he passed away during

The Classical Style (1750-1820) - . background belief in progress reason, not custom or tradition, was the best guide for

GIOVANNI MONTINI Bologna, Italy giovanni.montini@aosp.bo.it - . giovanni montini has documented that he/she has no

The IRAC/MIPS Survey in EGS - . jia-sheng huang /giovanni fazio and the egs consortium harvard-smithsonian center for