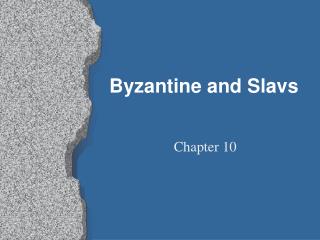 Byzantine and Slavs . Chapter 10. The New Rome. 10-1. Byzantine Foundations. A.   In A.D. 330 the Roman emperor Constantine built Constantinople at a strategic place where Europe and Asia meet; the site, on a peninsula, offered control over trade routes and natural protection from attack.

Byzantine - . the return of the roman empire. review. what had happened to the old roman empire? why had the western part

Byzantine Navy and Military - . byzantine navy. byzantine ship building. ships could be built in many shapes and sizes.

Byzantine Art and Culture - . hagia sofia (church of the holy wisdom). justinian’s monument to the byzantine empire as

Byzantine Empire and Constantinople - . a change for christianity. so where was it?. constantinople. the emperor