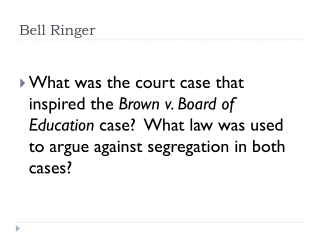 Bell Ringer. What was the court case that inspired the Brown v. Board of Education case? What law was used to argue against segregation in both cases?. Young People Take On Jim Crow. Sit-ins, Marches, and Boycotts. Little Rock Nine.